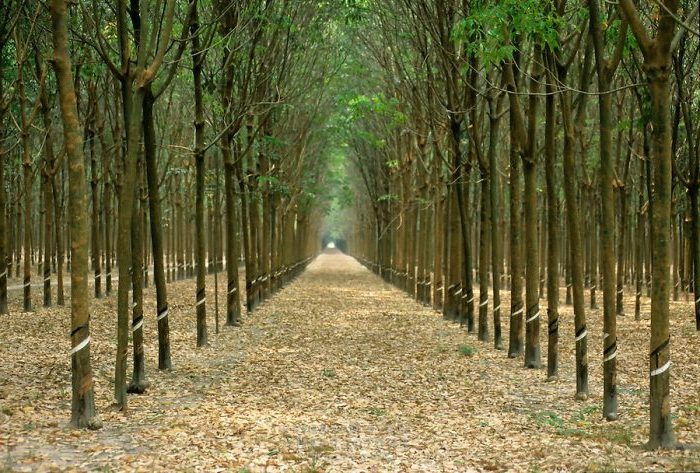 Summary of Goals and Objectives

The project addresses the gender-sensitive issues of land
dispossession, livelihoods, and vulnerability of Thai and Khmu ethnic
minority people in Dien Bien Province, Northern Vietnam. The expansion
of rubber plantation in the non-traditional areas of mountainous Vietnam
has affected the land access and  livelihoods of local communities,
while expected benefits have not been yielded yet. Women are among the
most affected by by the loss of livelihoods, making them more dependent
on their male relatives. In addition, rubber monoculture can be
associated with disaster risks and environmental issues: erosion,
droughts, and pollution of streams from herbicide uses. The objectives
of the project are:

To meet the objectives, the activities undertaken would include (based
on the Implementation Plan):

A1.
Start-up workshop and preparation:

B.
Training and participatory GIS mapping

Activity A1. Start-up workshop and preparation

Baseline data, including background information on land use, land
cover, socioeconomic, and demography of the project sites in Dien Bien
Province, were collected prior to and during the first and second field
trip. A part of the data were inherited from our previous project in
Dien Bien. The rest of baseline data were provided by the local
authorities, including the provincial, district and commune-level
People’s Committee and the Dien Bien Provincial Department of
Agriculture and Rural Development (DARD).

A start-up workshop was organized on September 13th, 2017 in Dien
Bien city. There are around 25 participants, including the
representatives DARD, Provincial Department of Natural Resources and
Environment (DONRE), Dien Bien Rubber Corporation, ass well as district
and commune People’s Committees. In this workshop, CECAD introduced the
project objectives and activities to the local stakeholders. The
participants were then facilitated to discuss and give opinions on the
project plan and implementation. They also provided useful information
and reflections regarding the rubber expansion and the gendered
livelihoods and vulnerability of Thai and Khmu ethnic minority people.
Different participants have different viewpoints on the impacts of
rubber plantation and the gender issues. For example, the representative
of DARD views the rubber expansion project more positively, claiming
that it still has huge potentials for supporting local social-economic
development. Meanwhile, the commune representative expressed his
doubtful opinion that the economic benefits from rubber plantation are
still not achieved, and ethnic minority women and girls are more
impacted by the loss of land access.

We have encountered significant difficulties at the start of the
project, especially in obtaining the approval of provincial authorities.
As the topics (related to land and GIS mapping) are sensitive,
especially for a boundary province like Dien Bien, it took more than two
months to get the project accepted by the Dien Bien Provincial
Department of Public Security. This has delayed most of the milestones
of the project later on.

Household survey questionnaire, key informant interview, and
questions for focus group discussion (FGD) were prepared in advance of
the second field trip. The main aims of the field survey were: (i) to
investigate the livelihoods and vulnerability of local Khmu and Thai
ethnic people residing in rubber plantation area; (ii) to carry out a
gendered assessment on access to land and water resources of indigenous
women and men; and (iii) to study the participation of local people in
forest management and decision-making processes.

The field work was carried out in December, 2017 in two communes
Mường Pồn of Mường Cha district, and Mường Mươn of Dien Bien district in
Dien Bien province. Some details of the activities are presented as
follows:

The field survey for GIS and mapping was carried out by our GIS
expert, with the assistance of local village members. The activities for
field survey include:

Data were extracted and entered into SPSS program. Data were analyzed using
several statistics methods such as comparison tests, correlation tests and
correspondence analysis. Both qualitative and quantitative data were analyzed
to produce a thorough understanding of the livelihoods, vulnerability, land and
water access, and forest management activities of Thai and Khmu men and women.

A total of 103 households were sampled. Some demographic information of the sample are shown in the following table.

Some of the key findings from the data analysis include:

Knowledge on the issues of climate change, its potential impacts, as
well as necessary activities to reduce the adverse impacts and improve
the adaptive capacity to climate change were presented to the
participants.

During the discussion, the villagers of the two communes have
exchanged their opinions regarding the issues. Some members talked about
the adverse impacts of landslides and erosion, and how they led to the
desertification of farm land. This makes the farmers struggle to find
other farming areas. In combination with rubber plantation project, this
leads to the reduction in the availability of agricultural land, thus
affecting the local livelihoods. Some mentioned the potential impacts of
climate change on water supply for agricultural and domestic uses. They
said that because of changes in water quantity and quality due to
upstream deforestation, rubber plantation, and potential climate change,
the agricultural output in some areas are lower than the previous
years. The participants agreed that men and women would be affected
differently and have dissimilar capacity to fight against climate
change. Some women admitted that they have fewer opportunities to
actively participate into the decision-making related to climate change.

The heads of two villages claimed that protection forests are the
major solution to mitigate climate change and its impacts. However, they
said that the communities are quite aware of climate change, but have
little knowledge and incentives to implement adaptation activities.

The participants, divided into male and female groups, have been
instructed to join participatory mapping at each village. Afterward, the
participants have obtained better understanding on spatial distribution
of their land, and able to pin-point important locations related to
livelihoods and vulnerability. A series of maps were produced from based
from the knowledge and participation of the local communities, and
separated by gender group .

It is shown from the map and the presentation that male and female
groups provided different results, thus reflecting the variation in
their perceptions and activities. In Muong Pon 2 village, the men group
only reported that the bare hills near residential area are more prone
to landslides, while the nearby fields downstream rubber plantation are
subjected to droughts. Meanwhile, women reported landslides occurred in
farther areas, for example the valleys between rubber plantation hills.
This is partly because women are hired more often by the Dien Bien
rubber company, so they have better knowledge about the areas close to
the rubber plantation. The men group, on the other hand, have
recommended the development of fruits in some bare lands in between
forests and rubber plantation. This could be attributed to the role of
men in making decisions of livelihood activities. In Pung Giat 2
village, both men and women groups could identify water and fuelwood
collection points, as well as areas for agriculture and livestock
raising. However, the women group tended to be more specific about the
sites at risk, which are prone to droughts and landslides.

All groups identified main water collection sites, and discussed the
effect of rubber plantation on water quality and quantity. For example,
in Muong Pon 2, both groups located the three main water collection
points, from which all families pipe water to their home. They claimed
that two of these points are partly contaminated by the uses of chemical
inputs for rubber plantation as well as livestock grazing. The men
group recommended the improvement of water collection facilities,
including move one to be higher than the rubber plantation hills. Water
scarcity rarely occurred, but in that case, villagers have to wait for
few days until the water storage filled up or would go to farther points
to collect water (mainly by women).

The gendered division of labor and time dedicated to livelihood and
domestic tasks were partly shown due to the results of the participatory
mapping. Men were most responsible for farming as well as making
decisions like finding farming fields. Women were in charge of fuelwood
collection, livestock grazing, and some are employed for the rubber
company to oversee the rubber plantation. This may explain for the
better knowledge of women about the sites at risk of landslides.

An extra dissemination workshop was carried out in May 2018. Local
authorities have been informed about the final outcomes of the project as well
as introduced about the participatory maps and the opinions/expectations of
local communities. The authorities and the research team also discussed the
uses of participatory mapping in the planning of socio-economic development and
climate change adaptation.

The local authorities have perceived the gendered opinions of local
communities regarding to the livelihoods and vulnerability in the context of
climate change and rubber development. However, some expressed that some
demands of local authorities are not realistic and there are many factors
influencing the decisions on land use planning and climate change adaptation.

The authorities recognized the efforts and achievements of the project,
especially in encouraging and empowering local communities to participate in
land and water use management via the tool of participatory mapping. However,
they also noticed the limitations that the project have, as well as the
financial and operational difficulties in scaling up the project in Dien Bien
and Vietnam.

Description of Any Activities/Milestones Not Completed

As stated in the proposal, Thai men and women do not know where their
pieces of land in the rubber plantations are so they cannot profit from
rubber products; there is also no knowledge of who planted each area of
rubber trees: either the rubber company, the local authorities or the
local people. In other words, the ignorance of spatial visualization
adversely affects both men’s and women’s livelihoods and their food
security in an already poor region. One of the activities to meet
Objective 3 was To produce the final map of forest land and water
resources based on participatory GIS mapping. We could produce the map,
however, it was not possible for us to compare the land boundaries
demarcated in the red book with the actual land area of each household
in the rubber plantation. This is due to the fact that by the time the
project was being carried out the Dien Bien Rubber Company requested all
households that they had signed contracts with to return their red book
back to the company. When heads of households were asked the reason why
they had to return their red book to the company, 100% of respondents
said they did not know the reason why. The research team also contacted
the company for an interview, but was not successful. On a positive
note, after the training all participants were provided knowledge and
skills to help them recognize where their forest land and water
resources are on the map. This would help them argue with the Dien Bien
Rubber Company later to receive profit from rubber products.

During the implementation of the project we were encountering the following challenges: