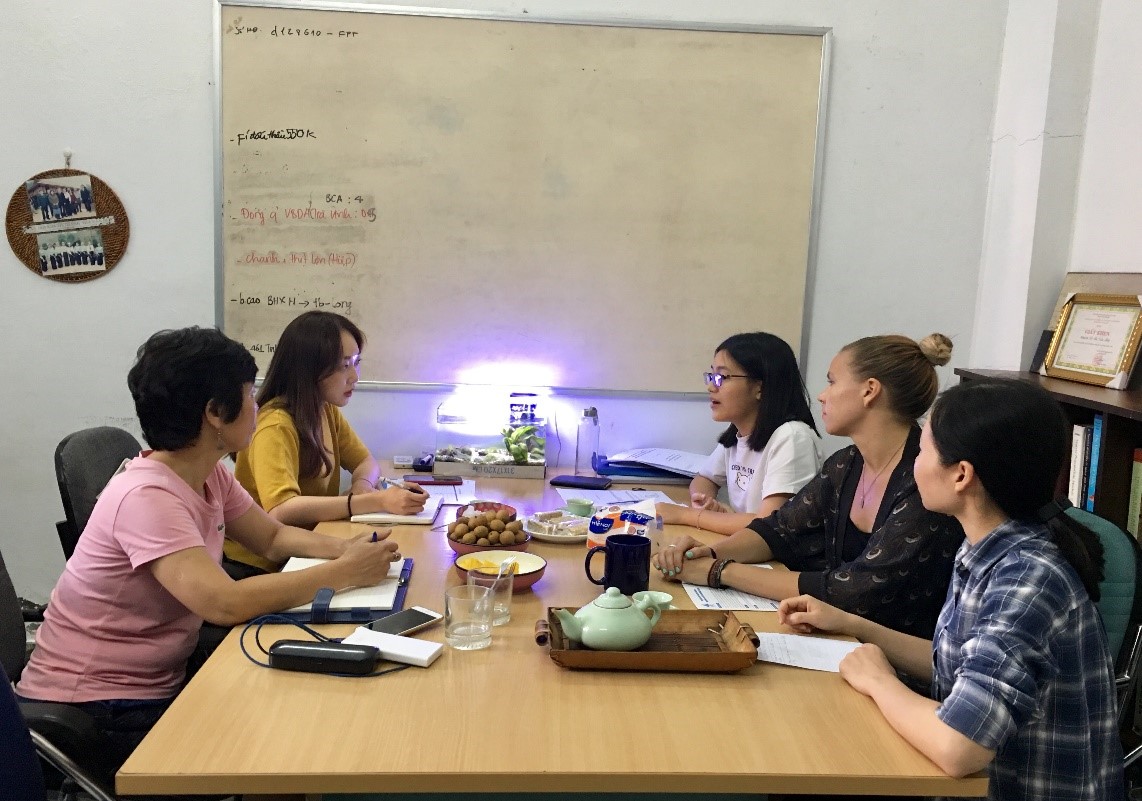 In order to carry out the survey of the new planting site, the Korean project team comprising representatives for SK Innovation including Ms. Hye Won Jung and Ms. Minh Trang Nguyen as well as the representative for UNEP Korea, Ms. Seong Sil Jo had a business trip to Vietnam. In the afternoon of July 31st, Ms. Seong Sil Jo went to CECAD office and had a detail discussion with CECAD staff about the plan for the field trip in the next day as well as the upcoming project activities.

In the morning of August 1st, the project team including 3 Korean officials and 2 CECAD staff had a field trip to Dong Long commune, Tien Hai district,  Thai Binh province to visit and survey the new planting site. In the meeting with the representatives of the Communal People’s Committee and Forest Protection Unit, the project team had a brief introduction about their company and organization, the project purpose and the activity plans. After the introduction, the local authorities expressed their willingness to support the project as well as the desire to better understand the specific plan and schedule for the upcoming activities in order to have suitable preparation and implementation.

After the discussion, the representative of the Forest Protection Unit took the project team to visit two planting sites located in Dong Long village and Dong Hoang village. At the first site in Dong Long village, it will take about 10 minutes to walk in mud to reach the planting area, while at the second site in Dong Hoang village, although the road to the site is quite hard to move due to the mud, the planting area is more spacious to build a tent and toilet for planting event and it was also a place where the mangrove planting project of the Ministry of Agriculture and Rural Development took place before.

In the early afternoon of the same day, the project team returned to Thai Binh city to have a meeting with the Forest Protection Agency to report the field trip in the morning. After listening to the report, the representative of FPA also agreed to support the project and wanted to be informed more clearly about the activity plan and the preparation for the upcoming event.

After that, the project team continued to move to Xuan Thuy National Park in Nam Dinh province to visit the last planting site. In the meeting with the director of the national park, the team introduced the project activities and the draft plan for the upcoming event. After listening, the director agreed to support the project, willing to provide information and images of previous mangrove planting activities taken place there as well as the data of tidal level of the region to help the team to choose the appropriate time for the planting event.

The project team then was taken to visit the planting site. The road moves to the planting area are very convenient when it only takes 5 minutes to walk from the headquarter of the national park. This area was also a place where many other mangrove planting projects had taken place. However, because the survey time was in the afternoon, the tide was up and covered the site so it was impossible to go down and directly observe the site.

In addition to the survey of the new planting site, the project team also visit some restaurants near the site to prepare for the visiting event of the Korean guest group. In Tien Hai commune, the team had lunch at New Dong Chau restaurant. Because it is located in a new resort, the space of the restaurant is quite peaceful and large, which will be suitable for large groups. In the national park, the team visited the dining room and conference room of the headquarter with the capacity of more than 50 people. Finally, the team stopped by an eco cafe for a short break and received much useful information about the ecotourism tour in the national park by boat.