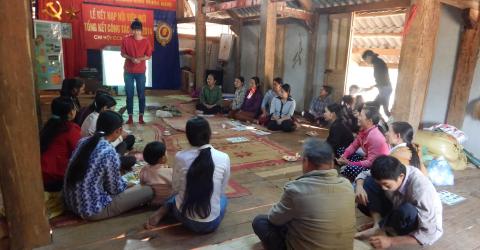 Within the framework of the project entitled “The Muong and Sustainable Agriculture”, a training course on The Pesticide Impact Assessment (PIA) was organized. The first training course on Agro-biodiversity was held in March 2012.

The course, which was held from May 18 to May 20, 2012, provided villagers, teachers from Tu Ne and Thanh Hoi middle schools and clinical health workers with a base of knowledge of pesticides and their adverse impacts on the environment, biodiversity as well as people’s health. In addition, the training course also provided the participants some methods, such as IPM and SRI, which aim to help villagers minimize and gradually stop using pesticides in agricultural production.

During the course, many topics were covered. These included the Reality of Using Pesticides in Vietnam as well as all over the world; Pesticides Use, Storage and Disposal; Pesticide Identity and Toxic level; Impacts of Pesticides on the Environment, Biodiversity and People’s health. The participants were divided into small groups and worked in groups to assess the impacts of pesticides in their villages. The participants were asked to focus on the ways pesticides were used; the amount of pesticide used; the way to store and dispose pesticides after use. The participants collected the information on, signs and symptoms when they were affected by interviewing each other. Each group then presented the results of their group to the other groups. Many female participants, who were very shy in the first training course on Agro-biodiversity (ADB), now became confident to present in front of the class and answer questions from the audience.

After the course, the participants understood better about the adverse impacts of pesticides on the environment and people’s health. As a result, they expressed their willing to reduce the amount of pesticides, although they know that it is not easy to do it right away. They would also like the project to continuously support so that they could gradually reduce and finally stop using pesticide in agricultural production.