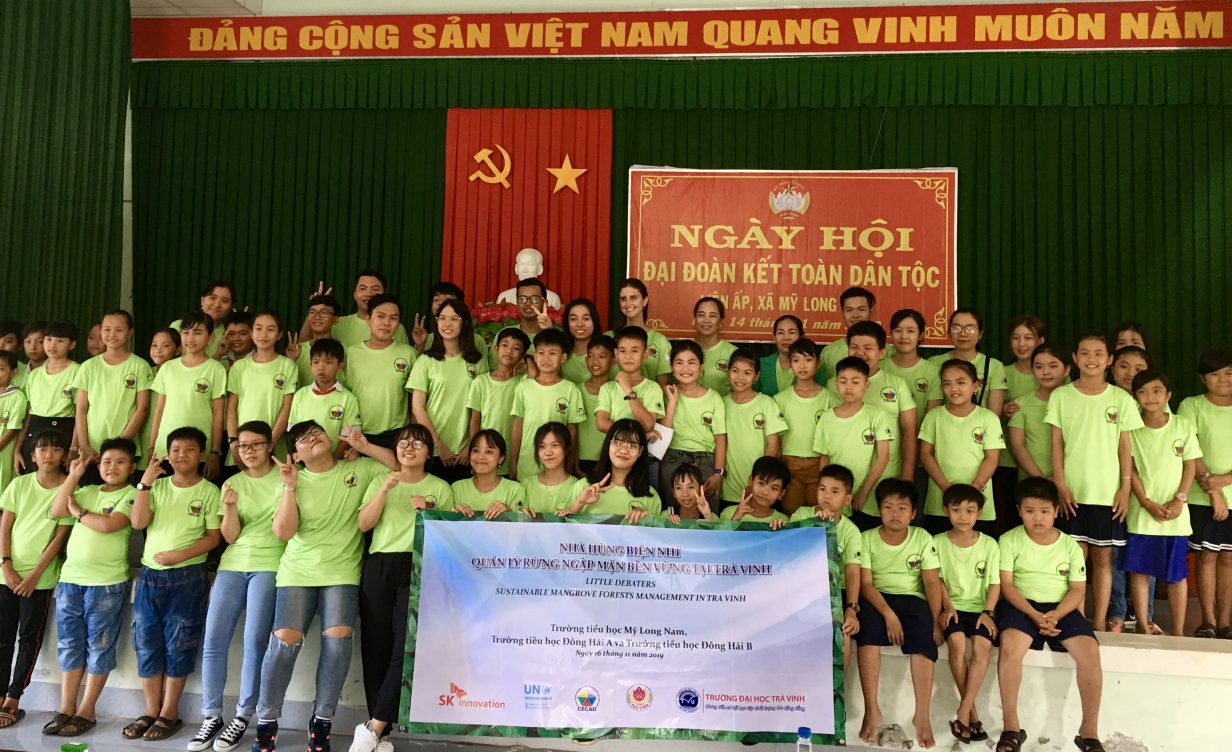 As part of the Plant for Planet project, we carried out an array of initiatives in the Mekong Delta region last week, working with university students, primary school pupils, forest rangers and the civilian forest protection group, to engage with environmental issues specific to mangroves and aquaculture, and discuss the solutions available.

Twenty students from the university’s environment club received lectures from Ms. Le Thi Hue of CECAD, who spoke on climate change and human interaction with the environment, Ms. Nguyen Hong Ung from Tra Vinh University, who lectured on mangrove biodiversity and conservation in the region, and Mr. Vo Nam Son from Can Tho University, who presented on shrimp farming and sustainable aquaculture. The purpose of these lectures was to provide interesting and relevant knowledge on the region’s surrounding environment and bring attention to sustainability issues in the context of climate change. Following, volunteer Sophia Collis presented on the activities that the university students would engage in with the primary students on the following day. The students had learned of the social, economic and environmental forces surrounding the topic of mangrove conservation, and our goal was for them to transmit this knowledge to the younger generation.

During the training, twenty university students were divided into four groups of five, and these groups would each work a group of five primary students. With one group of university students working with one group of primary students, they would guide the younger students in their arguments and help them formulate their debate speeches. Each primary student had a certain role within the debate. Student 1 presents the opening statement, Student 2 states the first argument, Student 3 states the supporting argument, Student 4 presents the rebuttal against the opposition and Student 5 ends with the closing statement. As there were two debates to be held on Saturday, that meant that there were two debate groups, arguing for either the affirmative side or the negative side. Groups 1A and 1B would debate in the morning and groups 2A and 2B would debate in the afternoon.

The plans for the debate were made clear, and the preparation for the first activity followed. Groups 1A and 1B got together to prepare a presentation on the positive aspects of mangrove conservation, which supported the affirmative argument for the debate. Groups 2A and 2B gathered to formulate a presentation on why mangrove conservation is less important than farming and socio-economic development. These presentations were to be presented the next morning at the primary school and would introduce the topics of the debate in an engaging way.

At the end of the training session, students were each awarded certificates stating their successful completion of the Mangrove Conservation Ambassador Program.

Twenty primary students from two school districts gathered at the Dong Hai A Primary School. The morning started with an introduction to the debate, outlining the understanding its components and to be able to engage in a thoughtful argument, especially pertaining to the environment. The university students gave two informative ten-minute presentations that they prepared the day before, which covered details on the benefits of one or the other side of the mangrove conservation argument.

After the presentations, we directed the four groups of university students to pair up with the four groups of primary students and begin helping them with the debate. The primary students came from Dong Hai A Primary School, Dong Hai B Primary School and Mi Long Lam primary school. Students were supplied with in-hand materials that contained information and pointers for both sides of the argument and guidelines for each student’s unique speaking role in the debate. It was wonderful to see the university students engaging with their groups and working one on one with the primary students, who eagerly wrote down what they would say for their assigned speaking role.

After an hour of preparation, the students began practicing their speeches within their groups, starting from the opening statement, then to the arguments and rebuttal, and ending with the closing statement. The excitement continued while rehearsing the debate with the opposing team. The two groups faced each other and one by one, the students spoke their part of the argument into the microphone. The university students were helpful in guiding these initial practice rounds and gave confidence to the students.

This day
involved giving informative lectures on mangrove conservation and sustainable aquaculture to the Tra Vinh Forest Rangers. Lectures were given by Ms. Hue Le, Mr. Phan Quoc Nam, Mr. Vo Nam Son, and Mr. Hua Chien Thang, from the Tra Vinh Forest Protection Agency. After the lectures, the rangers got into groups to discuss and present ideas on how to better conserve the mangroves in the area.
The day presented a wonderful opportunity for the rangers to gather and reconnect and reaffirm their commitments to mangrove conservation.

The Forest Protection Group were presented with lectures from Ms. Hue Le, Mr. Vo Nam Son, and Mr. Hua Chien Thang. Although their roles are less official than that of the rangers, the group listened intently. Being educated on relevant issues pertaining to surrounding mangrove forest environment and aquaculture economy that supports the region is important to ensuring that the protection group remains dedicated to the cause of conserving mangroves in Tra Vinh.

On Saturday morning, Dong Hai A Primary School competed against Dong Hai B Primary School in the debate. Their classmates filled the room as an audience. Before the debate began, the university students that trained the two groups helped them practice once more during the final practice session. Then, students lined up on stage and took their seats in the order of their speaking roles. A committee of judges sat between them, consisting of Lan Anh and Sophia from CECAD, a university student from Tra Vinh University
whose group was not competing, and two teachers, one from Dong Hai A Primary School and one from Dong Hai B.

Each student had memorized their speeches and spoke with confidence and conviction. It was very impressive to see the young students memorize their lines, as that was not required. The opening statement on both sides outlined importance of mangrove conservation or farming and economic development. Both sides presented convincing arguments, and some students even used examples from their own family situations. Both sides performed very well, and it was time for the committee to deliberate. We came to the conclusion that the opposing team, Dong Hai were the winners, as they used their and provided more information, and as a team spoke the clearest on their argument for mangrove deforestation for the goal of economic development. Although in reality, this argument is what CECAD and environmentalists oppose, however the argument presented by the students was of better quality than the other team—the defining criteria for how to win a debate.

In the afternoon, the process repeated again. Two classes from Mi Long Lam Primary School competed in the debate. A different committee of judges was formed by teachers of the school, Sophia and Yến from CECAD, and a university student. Interestingly, the opposing team of this debate won once more, as they presented a more clear and convincing argument.

Both debates were a great success. They got the university students to work closely with the primary students and transmit their knowledge down to the next generation. The primary students were provided with role models and a new way of thinking about environmental issues. The debate tested their public speaking skills, persuasive abilities and memorization. Each student had to think critically about their topic in order to win in this competitive yet fun and engaging environment.